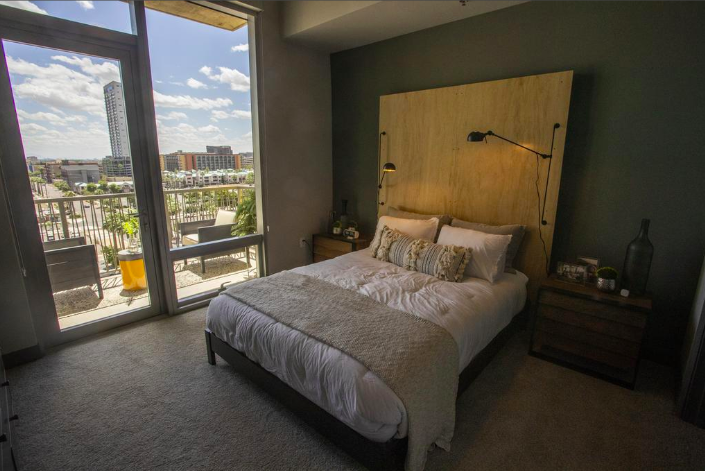 (Image: Jim Poulin | Phoenix Business Journal)
A bedroom at the Stewart apartment tower in downtown Phoenix. Rents continued to climb across the Valley in the first half of the year.

Apartment rents in Phoenix continued to climb faster than anywhere else in the U.S. during the first half of 2019, according to a report from RentCafe.

The mid-year assessment shows Phoenix rents rose 5.8% during the first six months of the year. That is the highest percentage growth in the country among major metro areas.

Average rent in Phoenix through June sits at $1,084 — up $59 since Jan. 1, according to RentCafe. But when you look around the Valley, average apartment rents fluctuate greatly.

In Scottsdale, for example, average monthly rent was $1,495 in June, up $34 since the start of the year, whereas Glendale apartments averaged $993 last month, an increase of $44 since January.

Much of the increases are attributed to the Valley's booming economy, which continues to add people and jobs. That strong demand pushes up rents across the region as people need somewhere to live when they move to town.

Mesa renters are paying $60 more a month since the beginning of the year, with a June average of $1,054, according to RentCafe.

The same effect is playing out in the housing market, with tight inventories and strong demand pushing sale prices higher.

Looking at the top 20 renter markets nationwide, Chicago had the next highest rent percentage increase after Phoenix at 4.8% followed by Las Vegas at 4.7%. In Houston, apartment rents increased by only 1.1% through June.

Manhattan saw the only average rent decrease — 0.1% — but rents in the Big Apple are still the most expensive in the country, averaging $4,190 per month, followed by San Francisco at $3,697.