Taiwan Semiconductor Manufacturing Co. Ltd. bought 1,128 acres of land in north Phoenix at a state land auction Wednesday afternoon on which it intends to build a $12 billion factory, which is projected to create more than 1,600 jobs.

The purchase was made under the entity, TSMC AZ Corp., which was the only bidder in the auction. The land was purchased for $89 million, which was the minimum bid for the land.

Taiwan Semiconductor (NYSE: TSM), which makes silicon chips for Apple Inc. and several other major technology companies, announced preliminary plans for a Phoenix facility in May.

Christine Mackay, economic development director for the city of Phoenix, said on Wednesday that Taiwan Semiconductor is planning to break ground on the site in 2021 and begin production by 2024.

Over a five-year period, the company plans to hire 1,900 people to work in the factory.

"We are just so excited for them to have selected Phoenix," Mackay said. "It's a great day for Phoenix, for Arizona and the whole country."

TSMC's plant represents the largest foreign direct investment ever in Phoenix and in the state of Arizona, Phoenix Mayor Kate Gallego said.

"The timing is really meaningful to us," she said. "We are looking at how we exit this economic downturn, and we want Phoenix to be the next smart city, with high-wage jobs. We are a global city and this is how we are going to come out of 2020 stronger and smarter."

Gallego said TSMC's plant will increase the quality of jobs for the entire business ecosystem in Phoenix, and will attract other companies to the city and state as well.

"This is a place people all over the globe are looking at," she said.

The land purchased by Taiwan Semiconductor is part of a larger, 3,500 acre parcel land and was owned by the state. It underwent a rezoning for employment uses that includes three districts: a technology campus, a technology park and freeway mixed-use development.

The 1,128-acre parcel purchased by Taiwan Semiconductor is located near the northwest corner of Loop 303 and the 43rd Avenue alignment. 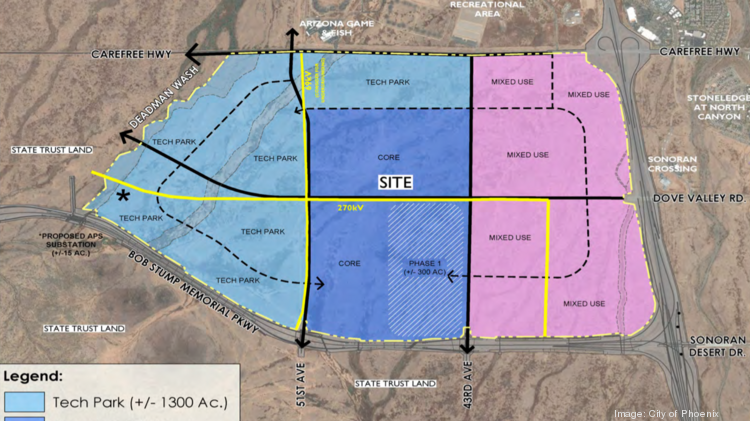 An aerial map shows a large swath of state land that the city of phoenix is aiming to prime for an employment corridor.

The technology campus portion includes 1,078 acres and is located near the center of the site, according to city documents. This portion will be allowed to contain the most intensive development and commercial uses. The technology park portion of the area will include 1,217 acres of planned employment and commerce park uses on the northern and western portions of the site. The freeway mixed-use district will include 1,243 acres on the eastern portion of the site along the I-17 corridor and could include additional employment uses, regional commercial, office, hospitality and multifamily development.

The rezoning of the 3,500 acres for employment uses was approved by Phoenix City Council on Oct. 21, but rezoning documents did not list the user for the site.

Mackay said the remainder of the massive stretch of land that was subject to the rezoning will eventually be sites for other "like-minded" companies that are interested in locating near TSMC. At full buildout of the 3,500 acres, Mackay said the area could contain 150,000 to 200,000 jobs by companies interested in working alongside TSMC, but no companies have been identified yet.

"We were interested in working with our great partner, TSMC, first," Mackay said.

"I think they see [Phoenix] as the next world-class semiconductor ecosystem," Mackay said. "They said the workforce we have in Phoenix and our partnerships with our universities were some of their reasons for choosing Phoenix."

Back in 2016 when the process started, other Arizona and U.S. cities competed for the plant, Mackay said, but by the time the delegation went to Taiwan, Phoenix was the only Arizona city under consideration.

The site that was ultimately selected and the new Loop 202 corridor in southwest Phoenix, which was completed in 2019, were the only two sites under consideration for the plant, she said. They are the only sites in the city that can accommodate such massive development, she said.

"There aren't too many mayors who want to talk about electricity availability," she said with a laugh.

Phoenix City Council approved the development agreement with TSMC in November, and anticipate the project will have a 20-year economic impact of $38.2 billion. Under the agreement, the city will disburse up to $205 million to develop public infrastructure, including streets, sidewalks, water and wastewater to support the factory.