The region is a popular area for homebuilders 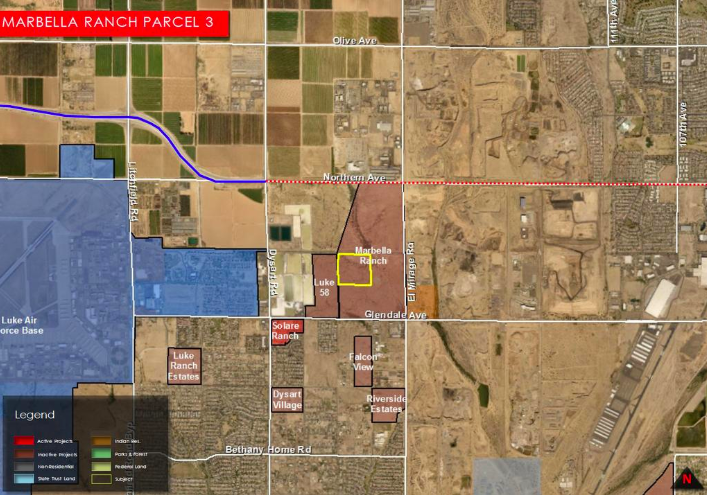 
Meritage Homes Corp. (NYSE: MTH) plopped down $4.3 million for 145 lots within Marbella Ranch in the West Valley, making it the third closing for the Scottsdale-based homebuilder within that master-planned community near Luke Air Force Base.

The 145 lots are final platted, said Patty Lafferty, a founding principal of Scottsdale-based the Land Agency and broker representing Meritage in the deal, along with founding principal Howard Weinstein. The 31-acre parcel represents Parcel 3, she said.

"It's rare these days to have the opportunity to provide buyers with the quality home, price point and location that we have at Marbella," McAndrews said.

"We have had remarkable success at Marbella largely due to location and the price point we are able to offer these highly appointed homes for," McAndrews said. "Additionally, we were able to keep a large inventory of quick move-in homes so prospects did not have to endure a long construction build time and could move in within 30 to 60 days from going under contract. Big advantage for us."

Those combined 295 lots encompass 51 acres and a total purchase price of $4.9 million, according to Cushman & Wakefield, which represented the seller in that deal, Scottdale-based TRS 8 LLC, an entity of Marbella Homes. Cushman & Wakefield's Brent Moser, Mike Sutton and Brooks Griffith negotiated that deal.

The West Valley is becoming a more popular place for homebuilders these days, with Toll Brothers starting construction on an 800-acre community called Sterling Grove in Surprise while Brookfield Residential Arizona has selected the first two homebuilders for its 1,130-acre Alamar master-planned community in Avondale.

Meanwhile, of the six Phoenix-area master-planned communities to make the list of 50 top-selling communities in the nation, five are in the West Valley.