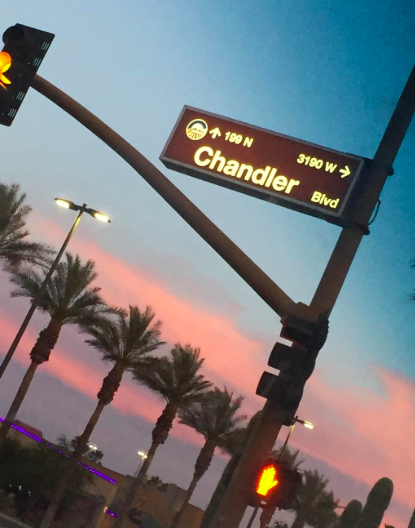 (Image: Mike Sunnucks)
The project is slated for one of downtown Chandler's last vacant plots of city-owned land.


A new entertainment complex development has received approval in Chandler, according to a report in the Arizona Republic.

The project is slated for one of downtown Chandler's last vacant plots of city-owned land, known as Site 7, which sits at the northeast corner of Buffalo Street and Arizona Avenue. It once housed a gas station and tire shop. At present, it is a parking lot, according to the Republic.

Late last week, Chandler City Council approved a development agreement with LGE Design Build to transform the vacant lot to a 37,500-square-foot mixed-use development. The Phoenix-based developer proposes to build a mix of retail, restaurant and entertainment uses over the next five years.

Per the agreement, LGE will pay the city rent for five years, with an option to purchase the land during the terms of the lease, according to the Republic.

LGE's proposal includes constructing a one-story building with 7,500 square feet of retail space, as well as an attached two-story structure with another 30,000 square feet of space of retail and entertainment uses, a well as onsite parking.

Construction must begin within three years, per the agreement, and the project must be completed within two years of breaking ground, reports the Republic.

LGE Design Build is the developer behind Overstreet Chandler, which sits across the street from Site 7. That 77,000-square-foot project is anchored by Flix Brewhouse and home to a handful of other restaurants. A Tucson-based restaurant recently inked a lease for one of the last remaining spots at Overstreet.