Arizona's largest homebuilder is back in Casa Grande.

This renewed interest comes at a time when major employers are setting up shop in Casa Grande, including Newark, California-based Lucid Motors Inc., which has completed the first phase of a large advanced manufacturing plant in Casa Grande.

"Casa Grande is really coming alive, both from a homebuilding perspective and an investor perspective," said Jeff Gunderson, senior vice president of land acquisition and development for Lennar.

With a population of 58,466, Casa Grande has a labor force of 24,851 and a 7.9% unemployment rate, according to the Pinal Alliance for Economic Growth.

Wilke said he hasn't seen this much homebuilding activity in Casa Grande since 2006.

Casa Grande, which is 25 minutes south of the Valley, has been a hot area for homebuilders.

Over the past two years, nine homebuilders plopped down $181.61 million in Casa Grande, according to RL Brown Housing Report.

"The Casa Grande area had many available finished lots at an attractive price, and the builders took advantage," he said. "With a median new home price of $230,937 in 2020, folks are buying for value compared to the Phoenix market median of $351,867."

As of Dec. 31, 10 home builders had 29 active subdivisions in Casa Grande, Daniel said.

Casa Grande was among the top municipalities with the biggest growth in single-family homebuilding permits in 2020, with 1,114 permits representing a 96% increase in permits over 2019, according to the HomeBuilders Association of Central Arizona.

"We were fortunate to be able to purchase one of the very last finished home site properties in Casa Grande," he said.

When he saw the success other home builders have been having in Casa Grande lately, it became easier to convince top Lennar execs to dive back into the market, Gunderson said.

"We look forward to having success in this location," Gunderson said. "Hopefully, that leads into more deals and more communities and a real presence down in Casa Grande for Lennar." 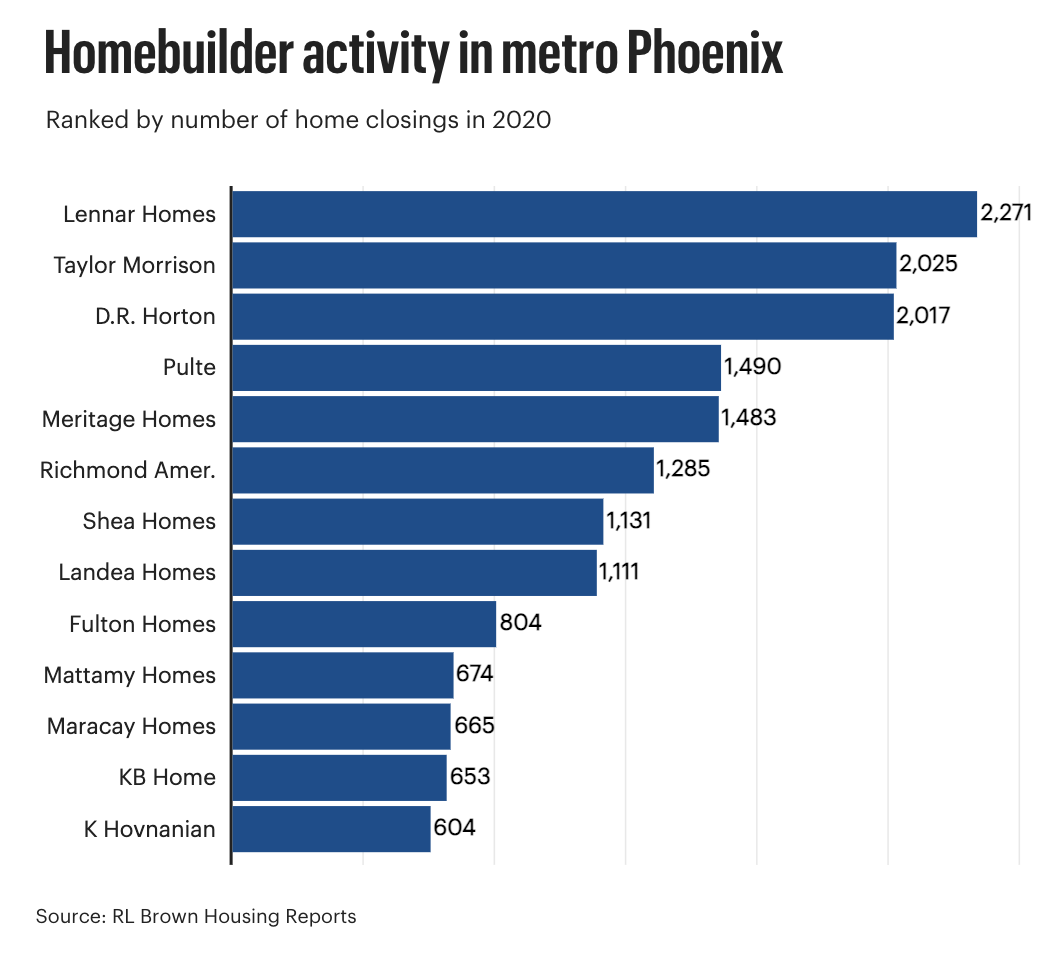 This will be the first time Lennar will be offering its NexGen product and its RV product lines. As for its newly unveiled "super house" model that combines both of those product lines, that remains to be seen, he said.

"It's a possibility," he said. "It's not currently planned."

"The market is new and it's maturing," Gunderson said. "Being able to be out a little bit further allows us to offer homes on larger home sites."

Gunderson said he will be very aggressive on land acquisition in metro Phoenix.

"We still have a very deep appetite for new deals," Gunderson said. "The Phoenix division for Lennar is targeting purchases of well over 10,000 home sites. We also are continuing to look for new deals every day."

Search the full MLS and Exclusive Property Listings.
(Prices and inventory current as of February 27, 2021)