Arizona's population continues to surge as people move to the state in droves.


According to the U.S. Census Bureau's 2020 population estimates, Texas, Florida and Arizona topped the list of states that added the most residents in the past year, while California's population took a major hit. Many people are swapping the West Coast for Arizona and Central Texas — a years-long trend that's only accelerated during the pandemic.


On the other hand, California lost an estimated 69,532 residents — the first major, negative population change for the West Coast state since at least 1900, based on available data, according to a report by Wendell Cox, principal of St. Louis-based international public policy firm Demographia.


Even before the novel coronavirus pandemic, people moving to Arizona from California represented 23% of all inbound residents over more than a decade. And more are on the way, according to a separate report from CBRE Group Inc.


Cox told the Austin Business Journal that California’s high cost of living is the main reason the state is seeing such a drastic decline in population. The state’s population growth had been slowing the past few years, with population estimates showing a year-over-year gain of only 147 people in 2019 compared with 317,590 people in 2015, according to the data.

Continued growth in skilled jobs has propelled Maricopa County to first place among large U.S. counties for talent attraction, according to a new report by labor analytics firm Emsi. The county, which recorded an 18% increase in skilled jobs from 2015-19, also took the top spot in 2018 and 2017. Clark County, which is home to Las Vegas, ranked second in 2020 and Collin County, home to McKinney, Texas, ranked third.


The second fastest-growing state was Florida with an estimated 241,256 new residents this year.


The Census data released Dec. 22 were annual population estimates from the federal agency, which is expected to release more detailed estimates for smaller geographies — such as metropolitan areas, counties and cities — starting in February. The estimates are separate from the bureau's official 2020 Census. 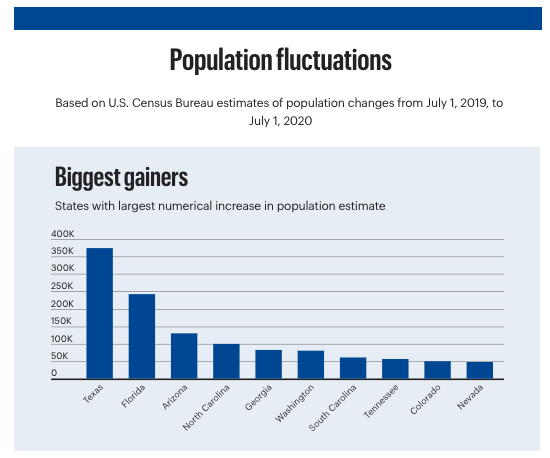 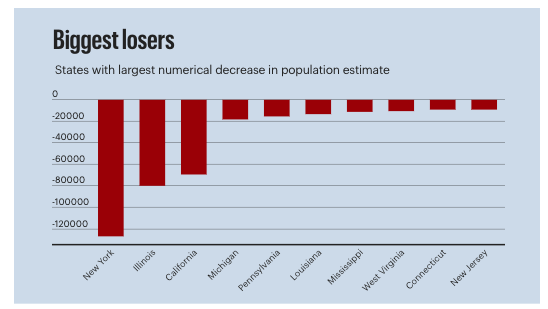 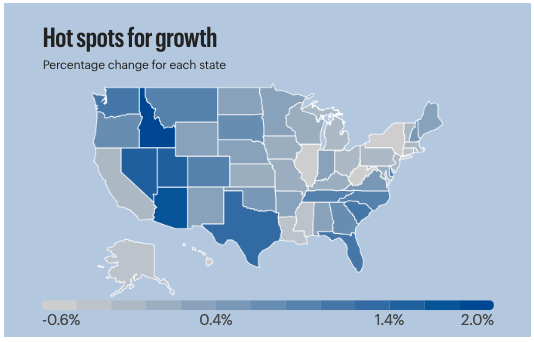